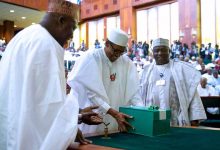 The Nigerian budget 2018 appears to have undergone the slowest cycle of approval in the history of Nigeria. After 170 days delay, the long-awaited national budget was finally signed by the presidency on Wednesday, 20 June 2018 following approval by the national assembly on May 16, 2018.

A quick reminder is that the Nigerian 2018 budget proposal which was presented on Tuesday, November 7, 2017, in the sum of ₦8.26 trillion to the national assembly has now seen an increase of ₦508 billion after approval.

A clear indication that a very significant proportion of the budget is concentrated on the government rather than the masses is the noticeable increase of ₦10 billion in allocation to the national assembly.

In this entirety, one would have thought the Ministries, Departments and Agencies (MDAs) having the large chunk of the Nigerian budget 2018 will make provision for the masses whom they ought to impact with their offices, but this seems not to be the case.

Smepeaks, in the bid to bring detailed insight about  SMEs in Nigeria, examined what the Ministry of Industry, Trade and Investment allocated to one of its 19 MDAs, SMEDAN (Small and Medium Enterprise Development Agency of Nigeria).

A quick overview of SMEDAN

SMEDAN aims to establish a structured and efficient Micro, Small and Medium Enterprises (MSME) sector that will enhance the sustainable economic development of Nigeria through the following: stimulating, monitoring and coordinating the development of the MSME sub-sector.

Well-developed MSMEs sector has proven to be the most veritable channels to combating poverty. The establishment of SMEDAN is therefore justified by the need to trigger the development of Nigeria’s MSMEs in a structured and efficient manner.

SMEDAN in the Nigerian Budget 2018 (Breakdown)

The Ministry of Industry, Trade, and Investment got in total, an allocation of over ninety-five billion (₦95,372,284,173) which saw a 3.8% increase from previous year’s amount, while the SMEDAN headquarters was allocated over four billion naira (₦4,199,741,515), a 34% increase, compared to the year before.

As usual, there was an increase in the total capital expenditure and recurrent cost of SMEDAN with an allocation of over three billion (₦3,539,553,077) and six hundred and sixty million (₦660,188,438) respectively.

Going by these numbers, one could easily think the Federal Government is staking a major interest in the Labour, Trade and Investment Ministry, but a breakdown of the SMEDAN various allocations reveals a totally different scenario.

Refreshment and meals, honorarium and sitting allowance alongside welfare packages had ₦3,222,200; ₦7,760,000 and ₦17,546,600 respectively in allocation while grants to government-owned companies got ₦400,000 only — the same amount was allocated to communities and non-governmental organisations. So here’s the concern: millions are spent on frivolities like refreshment, entertainment, etc., of government officials, while the actual bodies (NGOs, etc.) doing the work get almost nothing from the allocation.

Still, under SMEDAN, the rehabilitation, renovation and supply of furniture to selected primary and secondary schools amounts to one hundred and ninety million naira ₦190,000,000. But what has this got to do with small businesses?

Promotion of made-in-Nigeria product amounts to one hundred and fifty million naira (₦150,000,000). While SMEDAN puts this project as “Ongoing”, an average small business owner in Nigeria barely feels the impact.

Finally, a billion naira (₦1,000,000,000) was channelled to creating an enabling business environment. Obviously, this isn’t the first of it’s kind. But like many other government projects which fall by the wayside, it seems the more fund is allocated towards enabling a thriving environment, the more stifled Nigeria’s business environment becomes.

Well, this campaign is expected to be championed by SMEDAN but I doubt the fund would get implemented on the basis it was meant for. With this sort of allocation on SMEs, the Nigerian small business might not fit into the global brand if proper adjustment is not implemented.