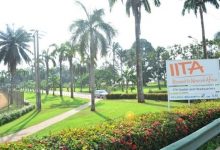 On  Friday, September 7, The International Institute of Tropical Agriculture (IITA), based in Ibadan, Nigeria, received the distinguished Africa Food Prize at the 2018 African Green Revolution Forum (AGRF) which held in Kigali, Rwanda. Becoming the first institution in Nigeria to receive this prize.

The independent Africa Food Prize Committee which was chaired by former Nigeria President Olusegun Obasanjo selected IITA for its deep commitment over many decades to producing a steady stream of innovations that have boosted the nutrition and income of millions of people across Africa.

In recent years, IITA’s work also has included a critical focus on connecting crop science to creating employment for Africa’s youth and ensuring African farmers can adapt to the stresses of climate change and the growing threat for an array of crop pests and plant diseases.

IITA was founded in 1967 and has since developed a track record as a protector and promoter of Africa’s most important food crops. IITA scientists have developed hundreds of new, improved and high-yielding varieties of major African dietary staple crops. This includes almost 400 new varieties of cassava, a plant which was once considered a poor man’s crop.

“IITA stood out to us for its steadfast and inspiring commitment to a research agenda that aligns with both our African traditions as well as the evolving needs of African farmers and consumers for the latest advances food production. From the cassava we’re still eating today, to the valuable and nutritious soybeans we now grow in our fields, to maize varieties that can withstand drought and deadly toxins—our diets and our agriculture businesses would be much poorer today without IITA’s leadership, and its willingness to forge powerful bonds with African farmers and African communities.” President Obasanjo said.

In all, the value of the crops developed by IITA and its partners for Africans now stands at $17 billion and counting, underscoring its contribution to not only Africa’s agriculture but its economy as well. IITA continues to provide solutions to African farmers by continuously monitoring fields and farms for signs of emerging risks or opportunities.

An example of this commitment was in 2016 when IITA scientists were among the first to identify the arrival of the dangerous and invasive fall armyworm pest in Africa. They are currently working with a number of partners to help guide farmers on solutions for controlling a pest capable of devastating entire fields of maize and 80 other crops in a number of days.

“I’m extremely honoured to be receiving this prize on behalf of IITA and proud to be part of a group of researchers dedicated to building lasting and relevant solutions for the continent. It would be remiss of me if I didn’t acknowledge the important role of our various partners, from other research centres to governments to the private sector, without whom our research might never have seen the light of day,” said  Dr Nteranya Sanginga, IITA new Director General.

Crops are not IITA’s only contributions. It recently partnered with experts at Pennsylvania State University to develop Nuru. Nuru is a breakthrough technology accessible via smartphone that employs artificial intelligence and machine learning capabilities to help farmers accurately identify a number of cassava diseases.

The ability to quickly spot the emergence of problems like Cassava Brown Streak and Cassava Mosaic disease, distinguish one from the other, is crucial to an effective response. These diseases are a major threat to cassava production in West Africa and responding effectively to these threats rely on early detection and fast-targeted interventions.