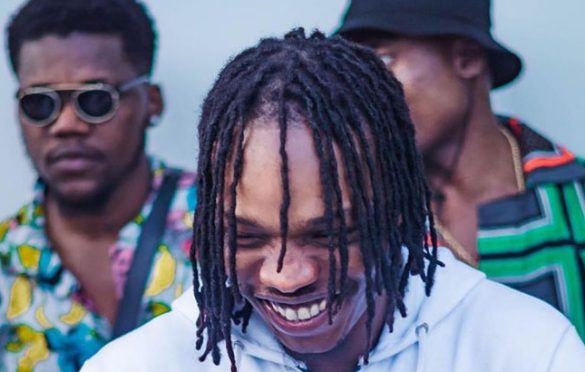 Controversially labelled the biblical ‘rejected stone’, Naira Marley –popularly known for his hit tracks–Mafo, Soapy and the one that brought him to the limelight, am I a yahoo boy?–is gradually becoming one of the capstones of the music industry.

Marley rose to fame shortly after his release in 2019 from the Economic and Financial Crimes Commission (EFCC) detention where he was held for supposedly being an internet fraudster. This event led to the release of one of the most popular hit songs that year, “am I yahoo boy?” The title of the song later became a catchphrase used by all and sundry. This article gives descriptive insight into Naira Marley and his brand strategy.

Although most people would argue against the success of his career and tag him a “rogue”, we can’t ignore the fact that his songs presently ranks among the top 10 on Apple music’s Top 100:Nigeria.

The “leg-work” (a dance movement that shortly swept across the nation) pioneer has enjoyed massive airplay and street credibility because of his authenticity, but hasn’t gone without being critiqued by a handful who feel the lyrics of his songs are inappropriate, vulgar, not suitable for public consumption and as most “anti-marlians” put it “misleading for the youths”.

Although his projected brand image has limited his chances of being featured or nominated in high profile events– such as the Headies Awards which the organisers deliberately excused his name from–2019 didn’t end without popular celebrities and politicians subscribing to his following and identifying themselves as “Marlian”.

A “Marlian”,  according to his fans describes one who is an ardent follower of Naira Marley and shares the same beliefs as their leader.

However controversial and obtuse the UK-born Nigerian “Opotoyi” crooner may appear, he’s successfully grown his brand and fanbase “Marlians”  both locally and internationally.

But beyond Naira Marley’s activities and controversies, there are a few things about him that stir curiosity. How exactly did he manoeuvre his way through overwhelming odds and rejections to carve a brand and a growing list of die-hard fans?

We looked closely enough and realised that there’s obviously a lot to gain from Marley’s strategies and we wouldn’t begin contemplating if it was all planned from the get-go or just a streak of luck.

Here’s how startups can replicate Naira Marley brand strategy and positioning that pivoted his career from being ‘over-looked’ to being ‘over-booked’:

Marlians, come forward, others f*ck off:

This popular phrase is used by Naira Marley to pull in his audience. He definitely has understood the importance of catering to your target audience. Marley has always known that his target audience is youths on the streets who mostly want to live carefree lives and go about situations precariously. His music, sound, lyrics, social media pass across that message unapologetically.

Identifying who your product or services is created for and tailoring all marketing and branding energy to satisfy these set of people is imperative to scaling a successful brand for your business. Marketing and Growth Hack stipulates that every brand must understand who its target consumers are, what they represent and how your brand can cater to their needs. According to branding expert Yali Saar, CEO and co-founder of Tailor Brands, “instead of asking whether or not your brand represents you first, ask yourself whether or not it represents your clients and the reason they need your service”.

Effective Communication of your brand’s positioning:

brand positioning is very crucial, albeit, the communication of the brand’s positioning is of utmost importance. This is because most consumers would be ardent followers and unpaid evangelists once they understand and believe what your brand stands for. Naira Marley, through all channels of communication-songs social media, press release, never fails to pass across his brand’s positioning statement, “we are rebels”. Communication is a key element that establishes your brand’s identity, authenticity, transparency and relatability. Consumers want brands that are relatable.

consistency is crucial to the success of any brand. It is a requirement when garnering new customers. According to Lucidpress, “70% of survey constituents reported that “consistent branding is crucial when communicating with customers. Brands that are consistently presented are 3 to 4 times more likely to experience brand visibility, earn consumer’s trust and inadvertently increase ROI by 33%.

In the case of Marley, consistency has helped accelerate his music career to becoming popularly acclaimed. “How so?” you may wonder.  His consistent message via lyrics and tweets, consistent brand image and persona, consistent positioning of his brand all contribute to defining a solid brand.

For instance, immediately after his release in 2019, he released “Opotoyi” a song that sheds light on drug abuse. One would think the arrest would tame his wildness, but being a good brand strategist, he retains his persona.

No publicity is bad publicity:

This perhaps should have been no 1 on our list. The key is harnessing the publicity to favour your brand. In the face of danger, weak companies quiver and crash while the strong ones look for the best way possible to win the heart of their customers back. The goal is to have good crisis management and strategic team members that would deploy all resources to ensure that the brand has a come-back after a major blow whilst still maintaining the brand’s identity. Take a look at how some brands have managed crisis.

Clearly, Naira Marley and his brand strategy has built for him a following, that if converted into customers, would accrue numbers for the brand. These key steps would ensure that you build an equal following of ardent “worshippers” and unpaid enthusiastic evangelists of the brand.

Do you find Naira Marley and his brand Strategy interesting? Let us know if this was helpful in the comment section below.