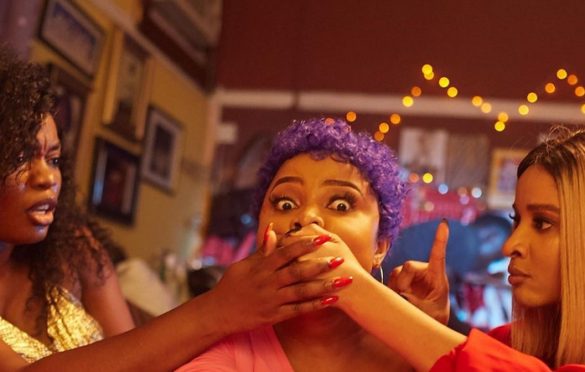 In the wake of December 25th, the movie, produced by Jade Osiberu and directed by Kayode Kasum, was released to be aired in cinemas across the nation. The movie which featured popular actors and actresses–Banky W, Adesua W, Bimbo Ademoye, Bisola Aiyeola and many others, have been well received by fans who trooped in endlessly during the holiday to behold the work of art.

Sugar Rush, tells a story about three sisters who discovered a ludicrous amount of money in the house of a rich corrupt man, interwoven with action and comedy, the story talks a different toll when nemesis catches up with them. The movie was said to be shot in 14 days across 14 locations, grossing a whopping 40million in the first week of it’s opening at the cinemas, Sugar rush was headed to becoming the top 10 highest-grossing Nigerian films landing on number nine(9)  position and the fifth (5) highest-grossing movie of 2019. By January of 2020, the movie had grossed over 100 million in returns.

The second week into the year, however, saw a gruesome directive from the National Film and Video Censors Board (NFVCB), the order was for Sugar Rush, the movie which had by now accrued 168 million, be suspended from being aired in cinemas across the nation. The news came as a shock to viewers, as most fans of the movie were spreading the gospel, galvanizing families and friends to go watch it and crack up their ribs. This article talks about the Sugar Rush ban and implications.

A statement realised on Facebook by the Film and Video Board about the Sugar Rush ban and implications., “It has come to our notice that #BringBackSugarRush is currently gaining momentum on Twitter with many speculating a ban on the movie “Sugar Rush” and presuming the supposed action as a sign of government’s intention to stifle creativity”.  This is however not the case as President Muhammadu Buhari GCFR led administration Aso Rock Villa is rather in support of the creative industry and has been promoting it as one of the avenues to diversify the nation’s economic base. The movie has not just significantly increased box office revenues within a short period but has improved our cinematic culture which is sine qua non for attracting the investment we so much desire as a nation”.

Furtherly, he said, “I, however, take responsibility for the gap in communication and the delay in granting final approval as the temporary approval given for the movie exhibition expired before we could release an official statement due to my preoccupation with extant responsibilities and backlog of movies requiring approval as a result of the December rush. I am currently working with the distributor, producer, director and key actors to grant final approval for the resumed exhibition at #cinemas. All hands are on deck and we are committed to serving your entertainment needs within the ambits of the law”.

The reasons for the suspension seems justified, however, what the board fails to realise is the disinterest this might cost for viewers across the nation and how this–Sugar Rush ban and implications would indirectly the revenue the movie could have grossed in the month of January.

In 2019, Okafor’s law, produced by Omoni Oboli was equally banned from showing in the movie cinemas akin to claim that the movie was a stolen idea. The ban took place a few hours before the movie was set to be premiered in cinemas; viewers already waiting at different locations across the nation to purchase their tickets.

The rom-com drama which featured several actors–Omoni Oboli, Ufuoma, RMD, Toyin Abraham and Blosson Chukwuejukwu to mention but a few–tells the tales of a young man who is on a mission to prove the “Okafor’s Law”. The ban which was placed on the 24th of March whilst publicity had been done and fans were waiting in the cinemas to view the movie was lifted on the 30th of March 2017, consequently, the movie did not enjoy mass viewership because fans had moved on to the next best thing. Making less than 100 million in the box-office, the success of “Okafor’s law” suffered a crippling experience because of the ban.

Subsequently, if proper measures are not scrupulously taken to ensure that movies do not receive these type of treatment after they hit the cinemas, there would be a decline in investors, automatically creating a loop-hole in revenue generation for the board.

The growing culture and fanbase of ardent Nollywood viewers would decrease drastically if care is not properly to ensure that the enthusiasm from locals does not die. Over the past two years, the country has seen an increasing market for Nollywood, with indigenes trooping in various cinemas to see their favourite actors and actresses.

Essentially, aspiring cinematographers would be discouraged from pursuing a film project as they might run into a loss. The culture of film banning and suspension must be over-hauled to ensure the industry is profitable to all.

Although, the movie is slated to resume viewing as at press time, but would Sugar Rush be able to bounce back?