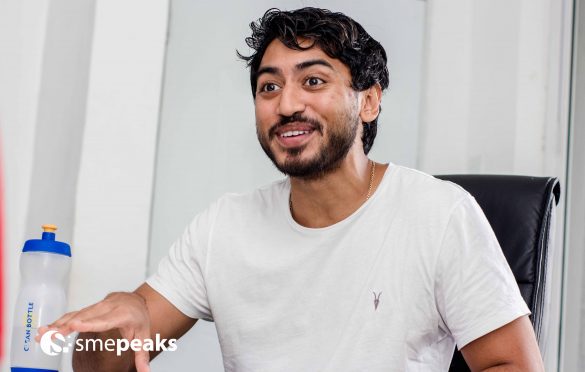 Fahim Saleh, CEO of the bike-hailing app Gokada in Lagos has been found dead and dismembered in his New York apartment.

A report has it that Saleh’s body was found headless and limbless by his sister in different plastic bags inside his luxury Lower East Side apartment. The victim’s sister purportedly visited him after she didn’t hear from him in a day. An electric saw which was still plugged in was found in the apartment.

Following her call to 911, the New York Police Department (NYPD) went to the seventh-floor condo. According to the New York Daily News, an elevator surveillance camera seem to have caught Fahim’s last moments.

The supposed footage shows him getting into the elevator leading to his apartment on Monday and he was followed closely by a man dressed in a suit, wearing gloves, a hat and a mask over his face.

“We have a torso, a head that’s been removed, arms, and legs. Everything is still on the scene. We don’t have a motive,” New York Police Department spokesman Sgt. Carlos Nieves said.

Neighbour Daniel Faust said he saw police lead two women from the building. “There was one that came first, with short black hair. Then a second one came, a little taller and with long hair. They were just hysterical, I guess in disbelief. And then they left with the detectives.”

Gokada has released an official statement announcing the loss.

We are deeply saddened to inform you about the sudden and tragic loss of our founder and CEO, Fahim Saleh. Fahim was a great leader, inspiration and positive light for all of us.

Asides being Gokada‘s CEO, Fahim was the founding manager of HackHouse, a tech incubator/venture factory focused in Bangladesh and also the CEO of TapFury, developing the finest prank calling app ever, PrankDial. He was CEO for five years of KickBack Apps, an entertainment-focused app company. The current apps were listed as “PrankDial, PrankPad, Textr.”

Fahim was also the founder and investor for Pathao, a Bangladeshi on-demand digital platform and transportation network company headquartered in Dhaka, Bangladesh.

This is a developing story.