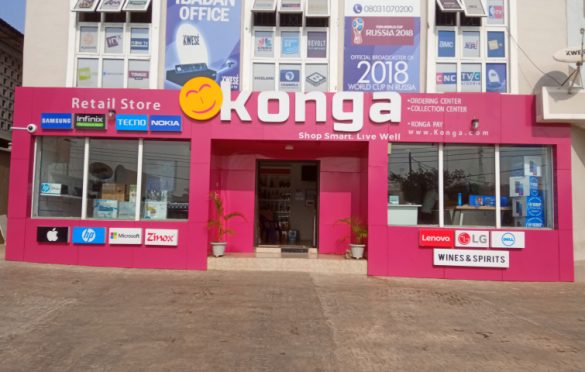 We’ve come to the end of a relatively slow week and several interesting things were abuzz in the tech ecosystem and internet during the course of the week. We have curated a list of some of these happenings starting from the local scene as Konga rejects $300m funding.

Who rejects money? Well, Konga did!

Recently, in a television interview, the co-chief executive officer, Konga Group, Prince Nnamdi Ekeh revealed that the eCommerce startup, Konga turned down about $300 million funding from a consortium of global investors, despite losing over ₦100 million monthly.

He further disclosed that the funds were rejected in order to maintain a high level of integrity in the company.

“Although we have received several offers from interested investors, we are content with the group that is currently funding Konga. The group is highly ethical and wants us to maintain the highest level of integrity. Our investors have assured us of enough capital to survive the next five years at least. This was why we did not accommodate a valuation of $300m from a consortium of global investors last year,” he said in a report.

It’s interesting to note that in 2018, Zinox Technologies, parent company to Konga and Yudala, an offline retail outlet across Nigeria announced the merger of both companies.

The CEO noted that the company incurred a huge loss of over ₦400 million on a monthly basis at the start of the business. However, with “diligence and strategic approach to business”, it has been able to reduce the loss to about ₦100 million.

Similar to the steps taken by Jumia, another eCommerce giant — to go public — the company is planning to list its shares in stock exchange platforms like the Nigerian Stock Exchange, New York Stock Exchange and the London Stock Exchange.

Nigeria’s Minister of Information and Culture, Lai Mohammed in the unveiling of the revised edition of Nigerian Broadcasting Commission’s (NBC) broadcast code announced that the federal government has increased the fine for hate speech from ₦500,000 to ₦5 million.

In 2019, the ‘Social Media Bill’ and ‘Hate Speech Bill’ were reintroduced to the country’s National Assembly and measures were put in place in a bid to curb misinformation online. The bill appears to pose a challenge to freedom of speech, the press and social media.

The Nigerian federal government also approved a ban on exclusive/original local content on various broadcasting channels in the country.

The minister has said that the code’s antitrust provisions prohibit the possession of exclusive rights to the content for broadcasters who want to create monopolies and hold the entire market to themselves. The provision also aims to promote local content, encourage the growth of the local industry among others.

Additionally, the code will see that online broadcasters will be required to register with the commission hence preventing PayTv and video-on-demand platforms from making their content exclusive. They will also force them to sub-license content at prices the commission will regulate.

Any platform that infringes the provision will be given the chance to comply or be liable to a fine of nothing below ‎₦10 million.

Nigeria’s telecommunication company, 9mobile has launched an e-SIM, a software-based digital chip that is built into a device directly by the manufacturer.

This was made known by its acting director, marketing, Layi Onafowokan, who explained that “eSIM enables multiple usage and adaptation of one subscriber profile across a broad range of mobile communication devices, internet of things (IoT) and artificial intelligence (AI) applications including smart commuting, metering, tracking, and surveillance, rather than the restricted single-device use of the conventional SIM card.”

Last month, MTN divulged that it has started trying embedded SIM (e-SIM) and the trial is open to a limited number of subscribers who own compatible devices on a first-come-first-served basis.

To acquire the newly launched SIM, customers can walk into any of 9mobile experience centres to request for activation. Then they will be provided with a QR code to scan and download an e-SIM profile and perform the usual SIM registration.

Upon activating the e-SIM, customers will be offered up to 7GB free data. Users who want to change to an e-SIM will do a SIM swap at the select experience centre while those who purchase a new phone and want to swap back to regular SIM can also get a physical SIM card. 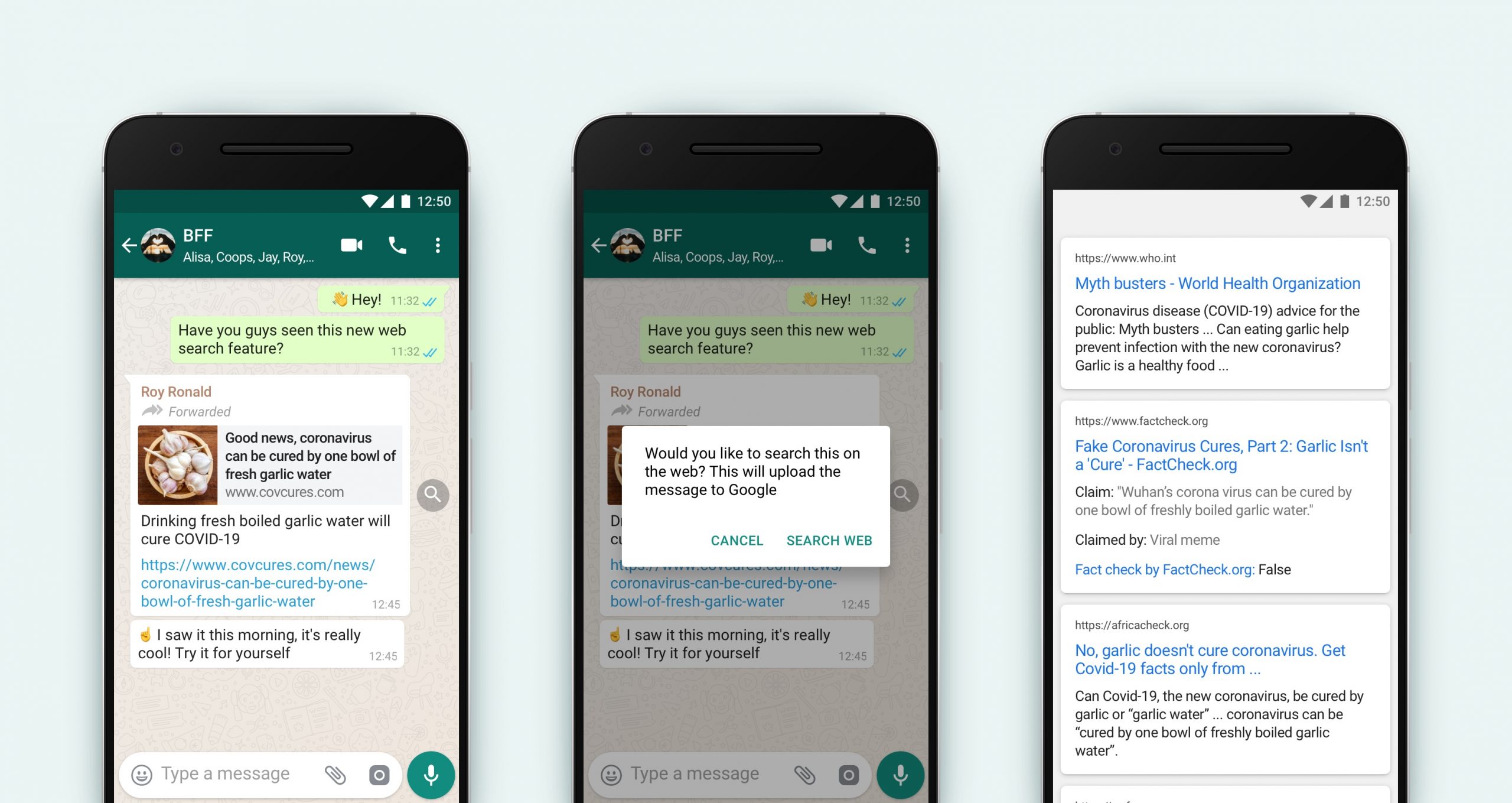 For a while now, especially with the coronavirus pandemic, WhatsApp has been putting in place different measures to curb misinformation on its platform.

Initially, it restricted the number of people messages can be forwarded at a time to, after the first five. Later on, WhatsApp added double arrows to label messages to indicate that it was created by someone who is not a close contact and has been forwarded many times.

Currently, it has introduced a new feature ‘Search Web’ to allow users to upload the message via their browser without WhatsApp ever seeing the message itself. Once the button is clicked on, it redirects to the web to search for news results or other sources of information that either confirms or discredits the content of the message.

Though it’s not certain when it will be rolled out globally, ‘Search Web’ is available to those using the latest versions of WhatsApp for Android, iOS and WhatsApp Web in Brazil, Italy, Ireland, Mexico, Spain, UK, and the U.S.

It appears that Facebook is delving straight into the area where YouTube is ‘king’ with the launch of official music videos on its platform in the U.S.

This is coming after the company partnered with major music companies including Sony Music, Universal Music Group, and Warner Music Group. These videos can be found through Facebook Watch and via individual artists’ pages. Users can share, react to, or comment on it like any other video on Facebook.

The new music videos section will be available on iOS, Android, and desktops according to Facebook.

iPhone users: You’re now able to limit replies to your tweets on Twitter

In May, Twitter started testing ways to enable users to limit how many people that can reply to their tweets. When they compose a tweet, users will be able to select if they will allow replies from everyone, people they follow, or only people they @ mention.

A new way to have a convo with exactly who you want. We’re starting with a small % globally, so keep your 👀 out to see it in action. pic.twitter.com/pV53mvjAVT

The feature was supposed to be rolled out later in the year according to the company but Twitter accidentally pushed the update to the iPhone version of its mobile app. Although the ability to limit replies on tweets is not currently available to everyone, it’s not clear then whether the feature has been expanded in any meaningful fashion with the latest update, a report stated.

In addition, Twitter appears to still continue testing the reply limit before it’s made available to more users.

The streets of Twitter can be really wild and rough considering the savage responses and harassment that goes on there. If rolled out fully, it will be an essential feature to help protect one’s mental health.