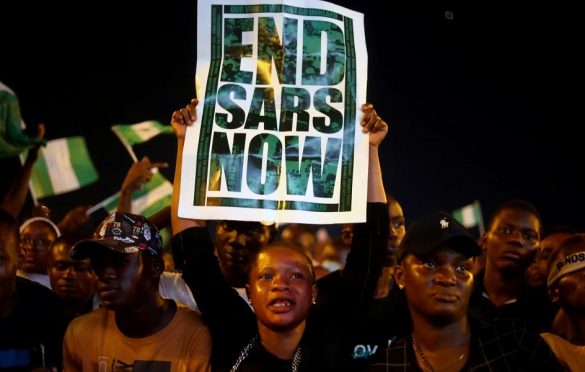 #EndSARS in retrospect: A 14-day sequence of “hopeful” agitations?

It’s been brutal, appalling and heartbreaking, but Nigerian youths are still on their toes, fighting for a reformed Nigeria. It’s been 14 days since the youths rose up to organise a decentralised social movement against the Special Anti-robbery Squad (SARS).

Although it’s been a peaceful protest, still, lives and properties have been lost, businesses have been affected, there’s a national and international uproar for justice. It was disclosed by the Lagos Chamber of Commerce and Industry (LCCI), that ₦700 billion in economic value has been lost since the protest commenced, economic decline is inevitable.

Let’s take a journey through the first day of protest till date:

Nigerian youths, led by Falz, Runtown among other Nigerian media personalities, marched to the house of the Lagos state Governor, where they held a protest till night. They remained at its gate till the next day, Friday, October 9, 2020.

Afterwards, an emergency parliamentary sitting, to deliberate the issue at hand, was held by the Lagos state house of assembly. This led to the following resolution:

In Abuja, protesters headed to the headquarters of Nigerian Police Force, where they camped till the Inspector-General of Police, Mohammed Adamu, addressed them. The Nigerian police purportedly used tear gas and water against the protesters. At this time, Aisha Yesufu, a Nigerian activist, had joined the protest.

At Ogbomosho, Oyo state, the protest turned into violence, as the first killing occurred. One of the protesters, known as Jimoh Isiaka, was killed.

The disbandment of SARS was announced by the Inspector-General of police, Mohammed Adamu. Due to the fact that the unit was not entirely dissolved but reassigned into other units, and has been disbanded and reformed severally in the past, the protest continued. Babajide Sanwo-Olu, the Governor of Lagos state, and Maigari Dingyadi, the Minister of Police Affairs, tried to convince the protesters about the disbandment, but to no avail.

While at Abuja, more junctions, including Berger were blocked, the protest was held in front of the University of Ibadan, Iwo road was blocked and vehicles were held at standstill.

The Public Relations Officer of the Nigerian Police Force, Frank Mba, announced the launch of the Special Weapon and Tactics Team (SWAT), replacing SARS, with examination of their psychological and medical well being for fitness evaluation.

At Abuja, protesters peacefully headed to the National Assembly, but were violently prevented by soldiers, causing injuries on some of the protesters.

Two hundred million naira fund, for victims of police brutality in Lagos state, was reportedly promised to be disseminated by the Governor, Sanwo-olu. There was a meeting between the Governor and the President of Nigeria, Muhammadu Buahri, where the five demands of the protesters were presented.

In a meeting organised by the Office of the Inspector General of Police and National Human Rights Commission (NHRC), the five demands were agreed upon. The meeting had in attendance stakeholders, including officials of Ministry of Police Affairs and Police Service Commission, representatives of Civil Society organisations and activists from the entertainment industry and #EndSARS movement.

The Lagos-Ibadan expressway was further blocked by protesters as the protest continued. The prohibition of the protest was announced at Abuja by the Minister, Malam Muhammad Bello. It was said that the protest was unruly, caused discomfort, violated COVID-19 protocols and should be discontinued in view of the fact that the demands of the protesters had been met by the Government.

Again, protesters were attacked in Lagos state, at Alausa.

“We #Anonymous will continue supporting Nigerians”, the hacker highlighted. The Governor of Lagos state, Babajide Sanwo-olu, announced that the trial of policemen, who shot at protesters in Surulere earlier in the week, had commenced.

A candlelight session, in honour of deceased victims, was held by protesters at Lekki toll gate and Alausa, Ikeja.

The Vice President of Nigeria, Yemi Osinbajo, apologised on behalf of government. 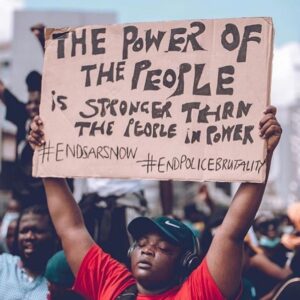 The Governor of Osun state, Adegboyega Oyetola, escaped an assassination attempt in Oshogbo,  after marching with the protesters and addressing them.

Despite the rain on Sunday night, protesters camped in front of the Central Bank of Nigeria (CBN) headquarters, blocking access to the place.

Soldiers were deployed to the streets of Abuja, stationed in strategic places to arrest the escalating protesters.

In Lagos, the protest at Lekki Toll Gate continued through Monday, October 19, 2020. From 7:00pm, protesters gathered at Alimosho, blocking Ipaja road. Also, there was a rally called for outside the Murtala Muhammed International Airport at the 7/8 Bus Stop from 9:00pm.

The Governor of Lagos state declared a 24-hour curfew, effective from 4pm, due to the thugs’ attack on protesters and the police. Later on, it was reported on Twitter that men, alleged to be working with Lagos State government and the Lekki Concession Company, were seen removing the CCTV Cameras, and lights were turned off at the Lekki toll gate.

Later on, it was also reported that armed men of the Nigerian Army, arrived at the protest ground, opening fire on peaceful and unarmed protesters, killing over 70 people, and leaving over 50 people injured. This happened despite the fact that the curfew was extended to 9.00pm.

Video evidence showed that unarmed protesters are still being attacked by the Nigerian army and the Nigerian police.

As we move further in great hopes, we envision not just a positive outcome, but a stable economy on the long run, where businesses would bloom in progression.