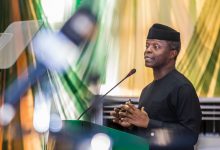 The Vice President of Nigeria, Prof Yemi Osinbajo during the 2018 Micro, Small and Medium Enterprises (MSMEs) Award held at the State Banquet Hall, Aso Rock disclosed that the Federal Government of Nigeria is planning to disburse credit facility between  ‎₦2 million to  ‎₦10 million to deserving Nigerian MSMEs without collateral.

The Award — which is to celebrate creativity and appreciate entrepreneurs in Nigeria — stems from the 2017 MSMEs clinic put together by the Office of the Vice President as part of effort to encourage and sustain Nigerian MSMEs.

Osinbajo in his remarks also disclosed that in addition to the one-stop-shop launched in some states to carry the MSME clinics intervention, the Federal Government would soon launch its shared facilities for Nigerian MSMEs initiative in partnership with the Bank of Industry (BOI), Federal Inland Revenue Service (FIRS), Nigerian Export-Import Bank (NEXIM) and the Nigerian Export Promotion Council (NEPC).

This initiative, as described by the Vice President will give access to MSMEs to enjoy shared facilities which will help to reduce overhead costs. He added that in other to remove blocks of bureaucracy faced by entrepreneurs, these facilities will be certified by relevant agencies such as The National Agency for Food and Drug Administration and Control (NAFDAC), Standard Organisation of Nigeria (SON), Industrial Training Funds (ITF) and The Nigerian Export Promotion Council (NEPC).

We have also partnered with the Central Bank of Nigeria and Commercial Banks, to launch a credit facility that we will make available to MSMEs; loans from N2 million to N10 million, with little or no collateral, for 5 to 7 years, and at an interest rate of 5 percent.

“We will also partner with the Central Bank of Nigeria (CBN) and commercial banks to launch a credit facility that will make available to MSMSes loans from ₦2m to ₦10m with a period of five to seven years with little or no collateral. The interest rate will be five percent. All that you need is to provide the committee with a bankable business proposal and guarantor,”said  Prof Yemi Osinbajo

Earlier in her comment, Hajiya Aisha Abubakar, the Minister of State for Industry, Trade and Investment, gave kudos to the Office of the Vice president over the MSME clinics initiative and awards. She mentioned that there are plans by her ministry in place to provide aspiring business owners MSMEs expert advice on legal, accounting among other areas relevant to their business growth.

I am passionate about empowering people through insightful articles.