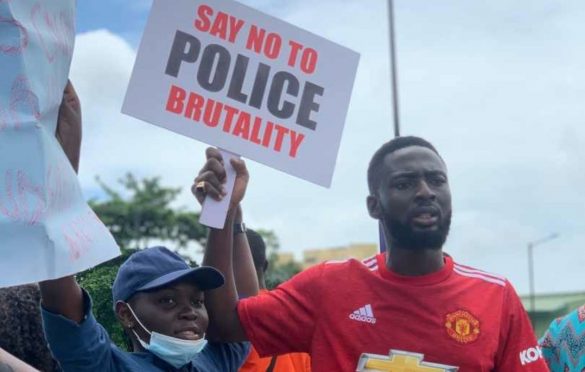 #EndPoliceBrutality: What we know about the #EndSARS protest so far

In recent times, the Special-Anti Robbery Squad (SARS) created to investigate and prosecute culprits involved in armed robbery, kidnapping and other forms of crimes have become famous for extorting, torturing, harassing and sometimes killing young Nigerians. The SARS officers are usually after people who are either with dreadlocks, piercings, cars, expensive phones and gadgets.

To curb this, more than once, the youths have taken to social media campaigning against SARS brutality on Nigerian youths. The outcry, however, has made little or no impact as the reported cases of police misconduct on the citizens they should protect keep increasing.

On Saturday, October 10, Nigerian youths started a peaceful protest across Nigeria as well as in communities around the world of Nigerians in the diaspora. One of the major reasons for the protest is for the president to scrap SARS. Top Nigerian celebrities like Wizkid, Davido, Falz, Phyno, Don Jazzy and Tiwa Savage have attended the protests in the cities across Nigeria. Other notable citizens like Feyikemi Abudu, Odunayo Eweniyi; CEO of PiggyVest, Olugbenga Agboola; CEO of Flutterwave, Dipo Awojide and many more have supported in helping the protesters have access to food and medical supplies as well as lawyers to bail to those arrested.

The youths made a #5for5 message which demands:

Responding in a televised statement, President Muhammad Buhari announced the plans to disband SARS. “The disbanding of SARS is only the first step in our commitment to extensive police reforms. We will also ensure that all those responsible for misconducts are brought to justice.”

Sequel to the approval of SARS dissolution, the President ordered the Inspector General of Police (IGP), Mohammed Adamu, to arrest and prosecute officers responsible for misconducts in the Nigeria Police Force (NPF), reiterating that the few bad eggs should not be allowed to soil the reputation of the force.

In the same vein, the IGP has announced the formation of the Special Weapons and Tactics (SWAT) unit to replace the recently-dissolved Special Anti-Robbery Squad (SARS).

“The Inspector-General of Police, IGP M.A. Adamu, NPM, mni has, today, 13th October 2020, in accordance with Section 18 (10) of the Police Act 2020, ordered all personnel of the defunct SARS to report at the Force Headquarters, Abuja for debriefing, psychological and medical examination. The officers are expected to undergo this process as a prelude to further training and reorientation before being redeployed into mainstream policing duties,” Frank Mba, the force spokesman stated.

Despite all these, it appears that Nigerians are not backing down in the protests as more protesters are lending their voices to the #EndSARS and #EndSWAT hashtags on social media. This agitation can be attributed to the fact that the government in 2017, 2018 and 2019 had disbanded the unit’s operations. In this light, the protesters are requesting that the president doesn’t just disband SARS but look into other problems with the Nigeria Police Force.

For timely updates on the #EndPoliceBrutality movement, visit the official website.